Place salmon on foil lined pan. Sprinkle with pepper and drizzle with soy sauce. Arrange orange slices on top and bake at 450 degrees for 8-12 minutes. Easy and good. Even all the boys like it.

Some friends introduced us to the idea that you could make homemade pizza on the barbecue.  We tried it, and it’s great!  It’s actually a pretty easy meal once you get the hang of it.  Don’t expect your pizzas to be round the first few times, but that’s ok. 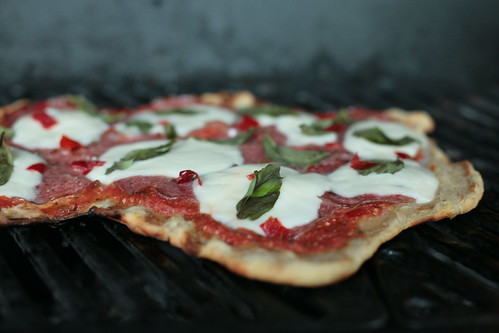 1.  Call your local pizza restaurant and ask if they will sell you a ball of pizza dough.  Ours sells them for $3.

2.  Cover a cutting board with flour and roll out the dough until it resembles a circle.  Ours always end up as ovals, but that’s ok, because an elongated circle fits better on the grill anyway.  The shape isn’t important, but just try to get the same general surface area of a pizza.

3.  Make the sauce.  Use our recipe for pizza sauce (for excellent sauce, if you have time) or just use sauce from a can if you’re in a hurry. 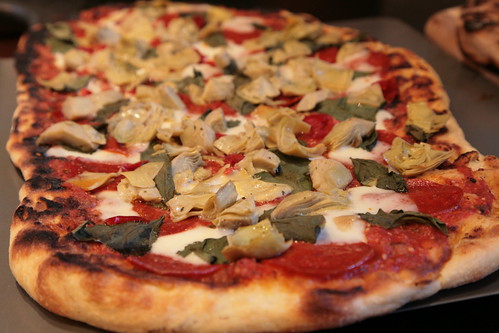 4. Turn your grill up at hot as it will go. Brush some olive oil on the top side of your dough. When the grill is hot, you need to very carefully transfer the dough from your cutting board to the grill, while you flip it over (so the oiled side is down).  This requires some acrobatics. Close the grill lid and let it cook for about 2-3 minutes.  Until the dough has firmed up but hasn’t yet changed color.  Take the crust out of the grill, but leave the grill turned on.

5.  Bring your crust back inside.  Coat the top side (the side without grill marks) with oil this time.  Flip it over so the oily side is down.

6.  Spread your sauce on the crust, then cover with your toppings.  We like:

7.  Take your pizza back to the grill and cook it for another 3 minutes or so.  Monitor it closely so it doesn’t burn.  When it looks like a pizza, then remove and eat.

This is my very favorite meal, and it is so easy to make. 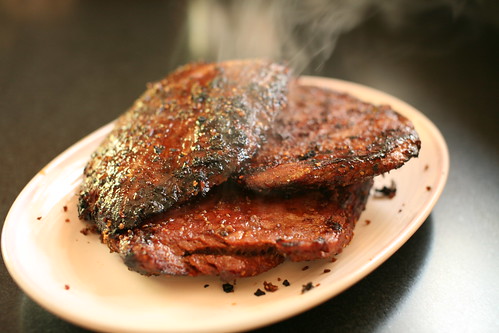 Throw everything into a big ziplock bag and squeeze the air out.  Massage the steak lovingly, then throw it into the fridge for 24 hours.  Turn on the grill at very high heat, and put the steak on.  After it’s on the grill, grind some black pepper on top.  You want to grill at a high temperature to sear the outside and trap the juices inside.  Probably 6-7 minutes per side.  Yum.

This was the first recipe I learned and and has become my standby meal when I need to show someone that I know how to cook.  It’s easy to make and guarantees to impress.  This recipe serves four.  It’s hard to mess up so feel free to approximate the ingredient amounts to suit your taste.

While the chicken is marinating, make your salsa.  Dice the banana and the mango (take the skin off both, and the pit out of the mango).  Throw it all into a bowl and stir the chutney in.  Maybe throw a little bit of chopped cilantro in as well if you like it.  That is your salsa.

Every year I go on a quasi-fishing trip (I paint and read while they fish) with a group of fun guys called The Royal of Order of Woodchucks. Each guy takes a turn preparing dinner one evening of the week. On my first trip, Peg wrote out these detailed cooking instructions for me so I wouldn’t mess up; they are pretty funny. I did succeed in making this dish and now the Woodchucks want me to make it again every year.

1.  Find a big pot, and check for roach residue. Boil 4-6 quarts of pure, mountain water in the big pot. If you don’t know how to boil water, stop now. Call the pizza delivery people.

2. Cook the pasta according to package directions. Usually 7-10 minutes. Try not to drink beer during this time or you will become distracted. If you let pasta boil too long, it will get limp as an octogenarian without Viagra.

3. While the pasta is cooking, warm the olive oil (also known in some culinary circles as “cooking medium”) in a large skillet, and add the garlic, which you have finely diced. Cook the finely diced garlic in the oil for 1 minute on medium heat. Don’t let it burn or you’ll look like an incompetent ass.

4. Now that you’ve practiced cooking something for a minute, you can add the following ingredients. You’re going to cook them for…another minute. After one minute, turn off the heat, cover the skillet and FOCUS on the pasta.

*1/16 teaspoon or even 1/8 teaspoon is a very tiny, almost miniscule amount. Think of it as the number of people who belong to both the NAACP and MENSA.

5. When you can throw a piece of pasta against the wall and it sticks, it is done. When it’s done, drain it in a Chief Kolander (former San Diego Chief of Police) . Then add the drained pasta and tuna to the rest of the ingredients in the skillet. Cook until the liquidy stuff burns off (food snobs call this “reducing the sauce”). Put a hunk of this on a plate for each Woodchuck and top with sliced green olives and freshly grated Parmesan cheese (not the grated Kraft shit in a can that is mostly chemicals). Enjoy, and thank God for a wife who does most of the cooking.

Serve with a Caesar salad and garlic bread paired with a nice bottle of Chardonnay. Serves 4 “normal” people or 8 hungry Woodchucks

Use Crisco if you have it and if not use lard. Use a cast iron skillet and fill it with the grease. Roll each piece in lots and lots of flour. Use lots and lots of salt and pepper to taste. Fry the chicken until it is a light brown.

Running Around Like a chicken with your head cut off…

When I was about six years old I remember being in the house when Mom was getting ready to make dinner.  Mom said: “Judi, let’s go get a chicken for dinner. I assumed we were going to the supermarket. Instead she took me to the orchard.

I remember our chickens had a coop, lay out and just hung out. They were as much a part of my life as the other animals on the farm. I had one special one I’d call “Cluck-Cluck.”

She took an ax from the back porch and asked me to find the plumpest chicken I could. I avoided “Cluck-Cluck” because he was my friend. Curious, I did as she asked and chased one down and brought it back for her approval.

I followed Mom over to a board where she laid the chicken down, holding it with one hand and with the other hand she raised the ax and let it fall, separating the body from its head.

Being totally stunned, I stood rooted to the ground. The chicken began running around the orchard without a head, blood pumping from its severed neck. I couldn’t believe what I was seeing. I recall inching over to mother and holding the bottom of her dress tightly in my hands.

Eventually the chicken fell to the ground.

I never recall Mom chopping the head off more than one chicken at a time, so I guess nine of us ate one chicken and Mom bulked up our dinners with mashed potatoes, gravy, green beans, and other vegetables. 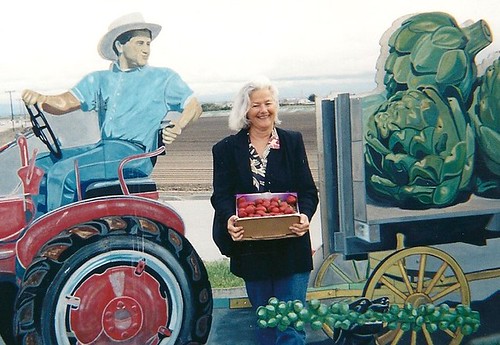 Pour over Chicken and bake 40 minutes covered. Take a nice walk while your yummy supper cooks!

Put all above in very large soup pot and cook 1 hour or as long as you want.

Must be served with corn chips, guacamole, sour cream and grated cheddar cheese for toppings.

* For a luncheon I serve it with bread sticks and grapes with a dessert and they love it.
* For Christmas I gave my kids a soup basket with all the ingredients one year.

Arrange 8-10 chicken breasts in a shallow baking pan and marinate for a few hours or overnight. Bake 1 hour at 350 degrees.  Turn chicken and baste twice. Serve and enjoy.

*You will need extra copies of this recipe for guests.

These are great for a light dinner with a salad, or make LOVELY appetizers.

Make a RUB of a mixture of:
1/2 t. of all the spices that start with “c”: cumin, cardamom, cinnamon, and curry. Add just a sprinkle of salt and a dash of the last c: cayenne pepper. Cook 3 minutes on each side. I put this in a plastic bag, throw the chops in, and shake.

Melt butter and add garlic. Skewer the shrimp on wooden skewers.  Brush the shrimp with marinade before grilling two minutes on each side.  Add some great bread and this serves four with a salad.